”Clearly not within scope,” said the department when Jommy Tee went on a Freedom of Information hunt for reasons a future prime minister’s first Australian government job ended in acrimony. Our correspondent found that while the Prime Minister seeks inquiries into the conduct of others, information about his departure from Tourism Australia is kept out of sight.

A summary of historical legal advice associated with Scott Morrison’s sacking as managing director of Tourism Australia in 2006 has been denied to Michael West Media (MWM) following multiple Freedom of Information (FOI) requests.

The Tourism Australia Board met in July 2006 and to discuss Morrison’s departure after he had lost the support of the board (and then minister, Fran Bailey).

The official reason for Morrison’s dismissal has never been made public, though has been plenty of speculation ranging from a dodgy tender process for a multimillion-dollar advertising contract;  vanishing documents including a probity audit; and personality clashes with the minister.

The legal summary was only discovered after another related FOI request was refused.

In essence we had to run another FOI on the communication around our original request to ascertain the document’s existence and other documents of interest.  This points to a systemic failing in the country’s FOI laws.

The original refusal followed a shambolic departmental process which resulted in an eight-month delay, including Covid lockdowns of Canberra-based departmental staff, in processing our request.

The lengthy delay resulted in the multiple interventions from the Information Commissioner seeking to speed up the process.

Our original request, submitted last July, sought the following documentation from the Department of Industry:

After the gee-up from the Information Commissioner, the department advised us in February that it was undertaking third-party consultation on our request.

As further deadlines expired, the department wrote to the Information Commissioner in February:

“The department has since realised that the single document identified is in fact not with scope …. The applicant asked for 3 specific categories of documents relating to the ‘separation/dismissal/termination of then Tourism Australia’s managing director Scott Morrison’.

”While 1 document that was identified bore a relationship to this topic, it is clearly not within any of the 3 categories and is so is not a document relevant to the request.”

The department apologised for misidentifying a document, and opined that no documents were found to be in scope.

It seems incredible that the department, to use its own words, identified a document and then undertook third-party consultation for a document that was “clearly not within scope”.

Even more perplexing, is that departmental briefing to the minister on Morrison’s departure, or the deed of agreement that the minister referred to in parliament could not be found.

The follow-up requests: no access allowed to the legal summary

Undeterred we submitted FOI requests for the document the Department stated “bore a relationship to the topic” and associated documents around relevant third party consultations.

We were denied access to the single document  – described as containing “a summary of legal advice provided to the Commonwealth government” – on the grounds of being subject to legal professional privilege.

According to the department the disclosure of the document would also breach material obtained in confidence.

…..access to the conditionally exempt personal information would be contrary to the public interest, as access would amount to an invasion of the Commonwealth officer’s privacy. This factor against disclosure is of such strength that it outweighs any perceived benefit that there may be in granting public access to that personal information.

What about me …. FOI-ing ourselves

MWM also submitted an FOI request around the consultation that occurred with our original request.

We were denied access to a further 11 documents associated with the third party consultation again for similar reasons of privacy, and personal information.  Those 11 documents consisted predominantly of legal advice and attachments; an email correspondence with the third party, and the single document that a bore a relationship to our original topic.

An additional eight documents were provided on the basis of partial access.

The answer to that question is contained in the partially redacted documents we received, which included redacted versions of the board agenda, paper, minutes of the board meeting and briefing for the Industry Department.

All over the course of three days, starting on a Saturday and reconvening the next week – the board spared themselves from dealing with the issue on a Sunday.

According to the partially redacted minutes, the board meeting that sealed Morrison’s fate began on a Saturday morning, July 29, 2006, and adjourned after an hour.

Given the number of meetings, dealing with the Scott problem and its fallout was an arduous affair.

There appeared to be only two substantive agenda items:

The minutes of the meeting pertaining to Agenda Item 3 were partially redacted on the grounds of legal advice and confidential information.

The minutes also record that Scott Morrison was not present at any of three iterations of the meeting.

Nonetheless even with redactions the documents unearthed are historical records of significance – records of when the board of a government agency, sacked its managing director, who would in later life become Prime Minister.

We hope that the National Archives of Australia are paying attention and preserve the relevant material, even if we cannot access them at this juncture in history.

It must be pointed out that some of the documents we obtained from FOI-ing ourselves were previously denied to us when we put a similar request to the Tourism Australia – a request where the Prime Minister’s Office directly intervened.

The current batch of documents confirm that advice provided by the PMO, to deny our previous FOI request with Tourism Australia was of a verbal nature – no paper trail exists aside from a file note held by Tourism Australia which we were denied access to. 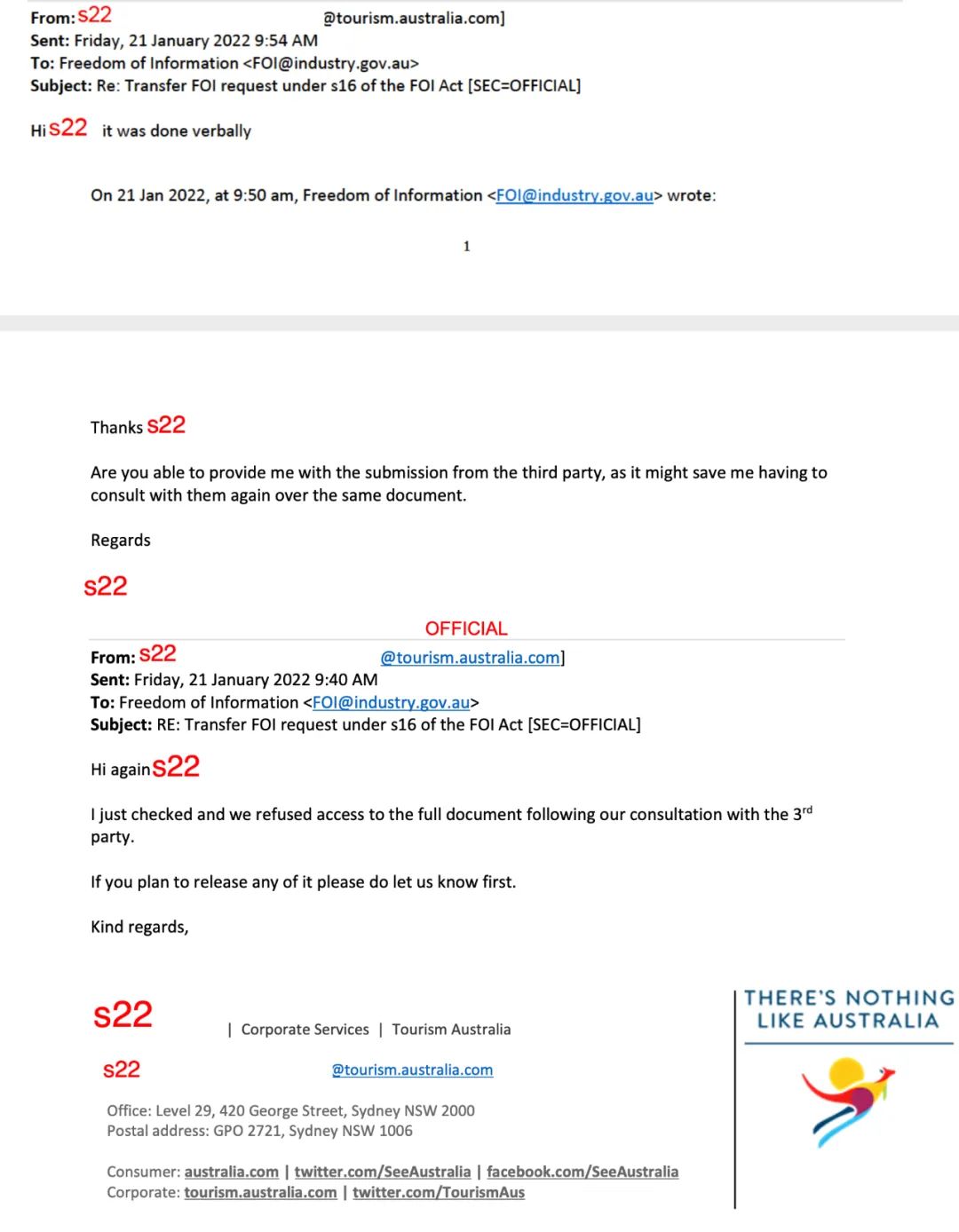 An unredacted part of the minutes from that fateful board meeting outline, in some detail, the process the board would follow in recruiting a new managing director.

Yes Minister would be proud.

It appears the process for revealing how a managing director is proposed to be hired is less of a concern.

Although the reasons may never be revealed as to why Scott Morrison was given the boot, the board cast judgment that he was an inappropriate fit for the agency.

In a few weeks, the people of Australia will get the opportunity to make their own judgment as to the fitness of Scott Morrison to become prime minister again.

Jommy Tee is a long-time career public servant, having worked in the policy development field for 25+ years as well as an independent researcher interested in politics, current affairs, and Nordic noir. You can follow Jommy on Twitter @Jommy_Tee.

The Year of the Tiger 2022 – Kung Hei Fat Choi, Australia and friends from around the world!