Skip to content
By Darrell Egan
2021.11.16
Bill Birtles is the supposed expert on China for ABC. However in what I have discovered it seems our Bertie Beetle gets leaned on by the ABC to be a misleading Anti China China propagandist for ABC State media and the politically leaning on Ita Buttrose and we have recently discovered.

Bill seems to flip flop between being centrist on China and an extreme Anti China propagandist as we see in Bill retweeting a story about an incident regarding COVID and a dog being treated poorly.
These two issues any China expert knows trigger racist profiling of China yet it is the kind of rhetoric journalists like Bill Birtles like to tweet and if it is not enough that racist comments are placed without Wall Street Journalist like Jonathan Cheng  deleting them.
Reference Link:
https://twitter.com/CulturaTerror/status/1460430797769428992 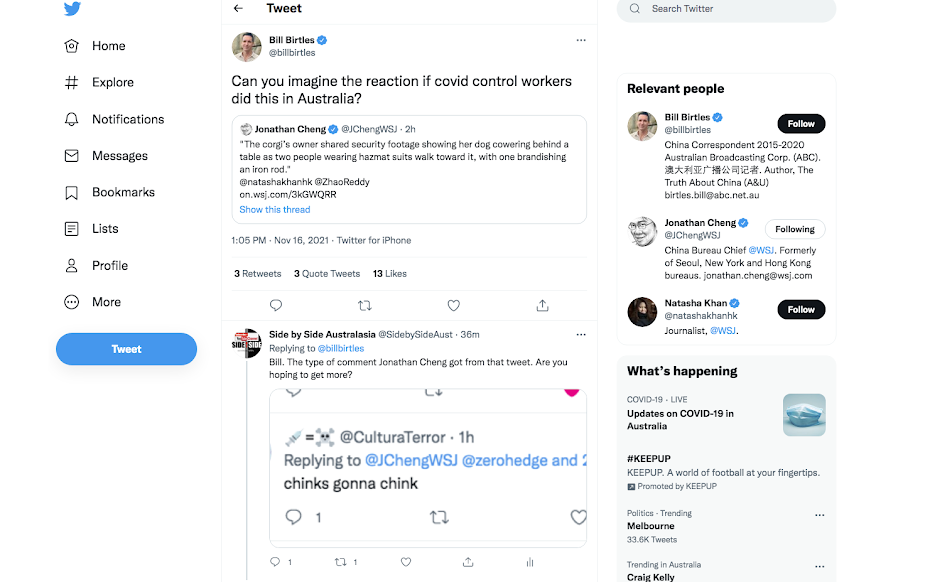 My first interaction with Bill Birtles was on We Chat when I was in Southern China during the Hong Kong protests in 2019. 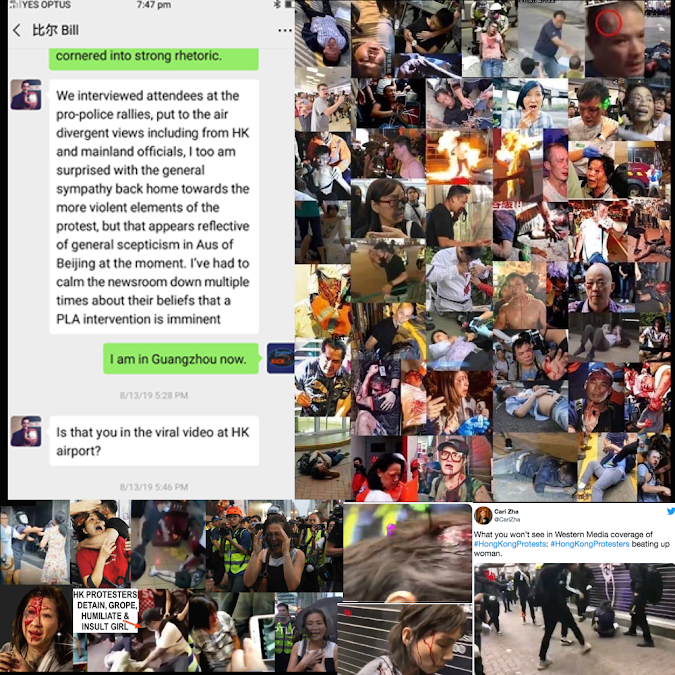 Whilst in southern China at this time of violent Hong Kong separatist protests I raised my concerns with Bill regarding the Hong Kong protester’s brutality.

Bill messaged me the Following:

“We interviewed attendees at the pro-police rallies, put to air divergent views including Hong kong mainland officials, I am too surprised with the general sympathy back home towards the the more violent elements of the protest, but that appears to be reflective of general scepticism in Aus of Beijing at the moment. I’ve had to calm the news room down multiple times about their belief that the PLA intervention is imminent.”

Bill’s statement just answered itself about him being surprised with Australian scepticism and sympathy from Australia towards violent Hong Kong protesters with his own newsroom wrongly and knowingly lying that the PLA were going to go into Hong Kong as an attempt to attach China as some kind of bully with the Hong Kong police.

ABC follows standard China demonising reporting on China in any chance they get in a news story putting up images of the Chinese army or Xi Jinping at a military show. You never see regurgitated  images of Joe Biden in front of military hardware in their reporting on the US. 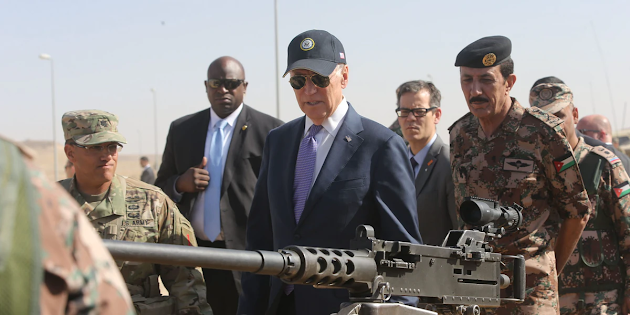 In addition the ABC did not show the nearly one hundred videos I have of the brutality of the Hong Kong protesters and 90% of ABC reporting was supportive of the peaceful protester narrative.

ABC do not want to stand up against violence against women if it does not suit their biased misleading reporting.

Not only this, ABC went out of their way to excuse acts of brutality with lies falsely accusing an elderly taxi driver in his 70’s of ramming protesters, when in fact protesters pulled him off his accelerator inside the Taxi causing the taxi to hit their own protesters. Bill and ABC are aware of their lie. However it did not get on ABC Media watch and the ABC did not retract this publicly.

Video evidence of the truth: https://www.youtube.com/watch?v=y-S9vlgEx0E&feature=youtu.be 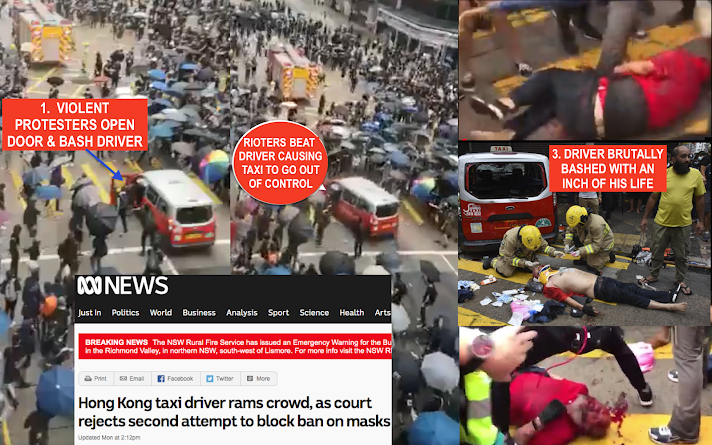 As well as ordinary Hong Kong people being attacked, during the Hong Kong protesters Hong Kong Police were treated as more than punching bags as they were on a daily basis attacked with Bricks Petrol bombs etc
Yet even like me you are not in agreement with anti vaccine protester’s ideology ABC seem to have a western White Privilege reporting when Australian police are attacked with putting up the headlines.
“I never saw one ABC report that referred to what Hong Kong police used in rubber pellets when they were under far more attack than Victoria Police during lockdown with scores of Hong Kong police injured or ABC put one headline explaining violent Hong Kong protesters as cowards from the victims of their brutality.”.
I guess Anglo Australia Police lives matter but not Asian Police lives.
“Two police officers injured as protesters pelt authorities with projectiles, police respond with rubber pellets.”
“Police label protesters ‘cowards’ as 62 arrested after crowd storms through Melbourne’s CBD”

It appears that Bill Birtles does not have the integrity to expose the misleading narratives of the ABC and call them out publicly across mainstream media.
On the contrary Bill prefers to attack people with an alias Linkedin account who expose alleged ABC lies as was in the case of his ABC mate’s China hit piece about foreign teachers being expelled from China. When Stephen was hit with the truth that any foreign English teachers overstay their visas as I have seen myself in China teaching there, Bill decided to tag team with his boys club mate to attack the woman Jaq James who exposed Stephen to this fact.
https://www.criticalsocialworkpublishinghouse.com/post/2018/12/21/the-curious-journalism-of-bill-birtles
We have to remember Jaq James alos exposed Bill’s mate Nick Mckenzie in defaming hit piece on a Chinese student in Australia who sued ABC and ABC settled out of court putting a gag order on the case.
So much for ABC transparency:
https://www.criticalsocialworkpublishinghouse.com/post/2018/04/03/abc-settles-with-and-gags-chinese-students-and-scholars-association-president
I have requested through a radio station to debate Bill Birtles for a debate, where he could share his side of the story. However he decided to not accept such a debate invitation.
However my invitation to debate Bill publicly with Bill is still open so he can have his say.
I guess the real Bill Birtles has stood up as an ABC State media flip flopping propagandist, in my opinion.

Human beings never learn from history and have always being fooled!