In the mainstream media there are news reports that cite China is creating a provocation, in some reports sating China is flying into areas of Taiwan’s actual air space, giving a war mongering impression China is flying near the Taiwan coast.

In this Anti China climate of fear mongering it is difficult to get the real facts from the hyperbole of news reports giving littte in the way of broad details.

Weather it is Taiwan or South China Sea there appears to be an eagerness in the mainstream media and with US foreign policy to give out rhetoric that China is a threat.

In relation to South China Se I go through fact and fiction in my interview with Vice Scappatura who is a lecturer in International Politics and Australian US relation at Macquarie University. 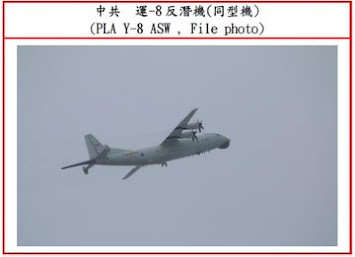 China’s Y-8 reconnaissance plane which was flying in air identification zone with a J-16 in support.

When we look at the issue of Taiwan we must also reflect on how Taiwan was taken by the US backed Kuomintang
Nationalists and how it was not a peaceful take over, which is not reported in mainstream media.
It also has to be remembered and what is not always reported is that Taiwan is not a de jure sovereign country.
Immediately after the Japanese surrender in WW2 the United States under what is termed General order 1 turned Taiwan over the Chang Kai Shek’s Kuomintang Nationalist troops on August 17 1945 whilst China was in a civil war over its rule.
Reference link:  https://en.wikipedia.org/wiki/Chinese_Civil_War#:~:text=The%20Chinese%20Civil%20War%20was,intermittently%20between%201927%20and%201949.
When taking over Chang Kai Shek’s Kuomintang troops started looting from the locals in Taiwan who were already impoverished from Japanese occupation.
Reference link. https://factsanddetails.com/southeast-asia/Taiwan/sub5_1a/entry-3799.html
This issue came to a head with locals when nationalist soldiers impounded tobacco from a 40 year old widow woman, who when demanded it been returned was hit on the head with a butt of a gun. A crowd formed to protest the action and the troops shot and killed one of the crowd. This sparked protests where many locals were killed, bringing on a martial law in February 1947.
It was lifted in May but a brutal martial law was reinstated in April 1948 to July 1987 which saw jailing, torture and executions.
Reference links: https://en.wikipedia.org/wiki/February_28_incident
Reference link: https://en.wikipedia.org/wiki/1987_Lieyu_massacre
Reference link: https://www.youtube.com/watch?v=vkdlDRqRbzw

Photos of jailed and summary executions during 38 year White Terror Martial law.
Reference link : https://alchetron.com/White-Terror-(Taiwan)
This obsessive martial law came to a head in March 1987 when Vietnamese refugees in a boat were heading to Nationalist Taiwan occupied Kinmen island, just a few kilometres off China’s coast. These refugees were  massacred in their boat by the Nationalist Taiwan Navy, even though they were waving a white flag.
Reference lik: https://en.wikipedia.org/wiki/1987_Lieyu_massacre
This incident international  led to the lifting of the White Terror martial law in July 1987.
October 21 2021 Air Identification incident
Relating to the recent report of China flying near Taiwan on October 21 2021, we should first look what zone China is alleged to have flow their planes in to, which is Taiwan’s Air Defence Identification Zone.

Taiwan’s Air Identification Zone.
Reference link: https://www.globalsecurity.org/military/world/taiwan/adiz.htm
By this map there is every chance Chinese military planes are going to fly in Taiwan’s Air Defence Identification Zone, which can be cited as multiple times.
In public information available to everyone, which is barely reported in the mainstream media, is where the fight path of Chinese military planes took on October 21 2021.
This public information can be accessed from Taiwan’s Ministry of defence official twitter account. 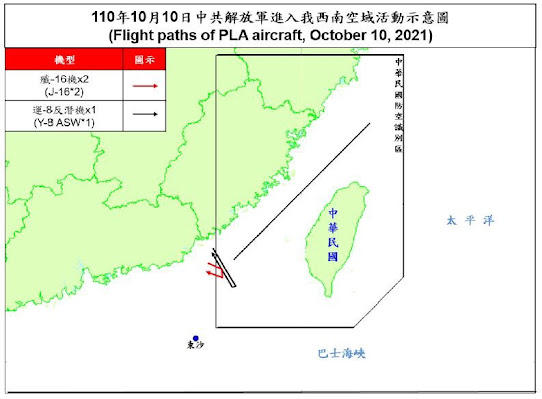 October 21 2021 flight path of Chinese planes.
Reference link:  https://twitter.com/MoNDefense/status/1447146367457972224
As we can see the Chinese planes were undertaking a short flight in a South East direction going into the bottom corner of what taiwan has as its Air Defence Identification Zone not its actual Sovereign Air Defence Territory.
The fight path is clearly not heading towards the Taiwan coast.
It has to be taken into account China is surrounded by US military bases in Asia with 23 kilometre range US M1 Howitzers pointed at China on Kinmen Island, just a few kilometres from China’s costal city of Xiamen.
In reflection it would be highly likely the US would be flying into such an Air Defence Identification Zone if China had guns pointed at Long Beach California on Catalina Island just 29 kilometres off the Long Beach coast.
This is a perspective that is not taken into account.
With this latest reporting of the October 21 incident there seems to be very little perspective and holes in the full story to paint a picture of Chinese aggression in what appears to be war inciting narratives.
Darrell Egan：Contributing journalist on Australia, China and Asian foreign affairs and general news stories