In the 2004 movie Alexander which depicts Alexander The Great’s push into Asia, Alexanders long time colleague says to him:

“The generals question your obsession with Darius. They say it was never meant for you to be King of Asia.”

The newly established Australia, United Kingdom and United States AUKUS alliance has a similar obsession in Asia and that obsession is China. This obsession for conquest in clearing Asia from any China input ignores China has been trading with South east Asia, even as far back as the time of Alexander with the later part of the Zhou Dynasty having Maritime Silk Road trade routes into South East Asia.

This was a the early times of trade and diplomacy for China with South East Asia which existed right up to the the 13th Century with Sandalwood trade with East Timor, then the Australian Trepang trade through Malaysian seafarer traders, before Australia was colonised and invaded by Britain.

Throughout this interaction in South East Asia,  in a strategic chess game of compromise diplomacy, China never had a desire to invade or take over countries in these trade areas and was mostly concerned with protecting their border regions which include the South China Sea.

China as a civilisation state dealing with many regional neighbours in its long history of diplomacy realise this, with offers to both Vietnam and the Philippines for joint venture in the South China sea. The United Sates seem to be undermining, with militarising the area with their Navy even though China is not interfering with the freedom of movement of international shipping in the South China Sea as admitted by retired US Admiral Cedric Leighton.

In the 16th century we saw invasions from western powers with the Portuguese, Dutch and British saw invasions of conquest right up to the US in the Vietnam war. 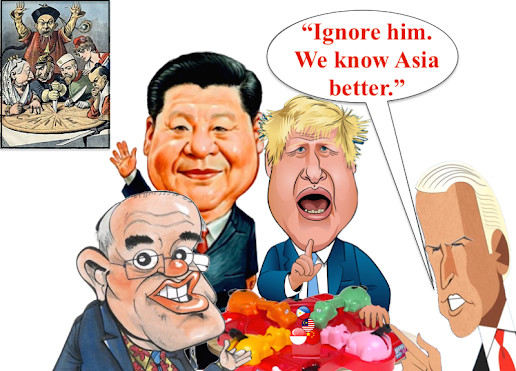 （Sydpost)
In these invasions was the western powers invasions of China and division on their country in the late 19th century, with a zero sum, your with us or you are against us foreign policy with Asia.Many horse gamblers bet odds on the historical track record of a horse US lead AUKUS group does not seem to have a strategy of Chess Game and more like a game of “Hungry Hungry Hippo” zero sum win game in Asia.

With this US pivot to Asia and dragging Australia into direct conflict with China in the AUKUS group, this hawkish strategic game of “Hungry Hungry Hungry Hippo” has even more dire consequences for the region and the world, than Western powers incursions in Asia starting the 16th Century.

Asian countries must be vigilant with these developments.